This post contains affiliate links. I may earn money from advertisments, at no cost to you. The opinions expressed in this article are based on my personal experience and research. They do not necessarily reflect the opinions of the companies mentioned or advertised.
20
April

The week 16 52 Ancestors in 52 Weeks challenge is Storms. I chose to write about Cyclone Tracy that hit Darwin in 1974. There is a small connection to my family from this storm. 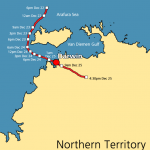 On 21 December 1974 the Darwin Weather Bureau identified a tropical low that had the potential to form a cyclone.2  Warnings were issued but many believed it would pass Darwin city.2  They were wrong and after some serious wind gust brought damage in the evening of 24 December 1974 the residents realised they were in trouble.2

At 3.05am 25 December 1974, wind gusts of 217km/hour were recorded at Darwin Airport.2  The wind gauge was destroyed at 3.10am with estimates the damaging winds eventually reached 240km/hour.2  The rapid expansion of the city to 43,500 people in the years prior to 1974 meant many buildings had been built unable to withstand the cyclonic force.2 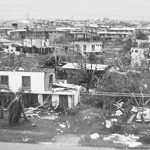 Cyclone Tracy killed 65 people and Darwin Hospital treated over 500 hundred people.2  In the aftermath, the city had to worry about lack of shelter, food, and the real threat of disease with no water, electricity, or sanitation available.2  The majority of the population was evacuated – 35,362 people in total with the elderly, sick, women, and children going first.2 Just over 10,000 people remained to assist in the cleanup.2

My grandma and granddad answered the call to take in refugees from Darwin, taking in a young family.  They told me the story of the young boy arriving holding his kitten. He had kept hold of it throughout the cyclone and the subsequent evacuation. They were all saddened when shortly after the family moved into their own accommodation in Perth the kitten was hit by a car.

As you can see a small link to my family in the aftermath of Cyclone Tracy.  I was still living overseas when it happened but my childhood upon arrival in Australia was punctuated with the Cyclone Tracy story.