Have you ever seen the movie the Imitation Game?  Have you ever wondered how and where computing truly started?  Have you heard of Bletchley Park?  When we started planning our UK trip my computer nerd brother said to me, you need to go to Bletchley Park, it’s the birthplace of computing.  It sounded more like something he would find riveting but knowing how much my son loves computers I decided it was worth a stop off on our trip north from London.  I did remember watching the Imitation Game and thinking well let’s give it a go.  I am so glad we did. 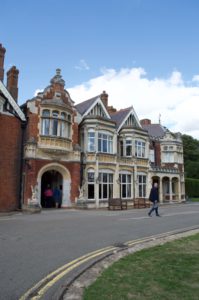 Bletchley Park is a heritage mansion that was the location of the British codebreakers during World War Two and played a significant part in ending the war.1  On 18 September 1938 the subterfuge that would be the mansion of Bletchley Park saw people move into the building as friends enjoying a weekend getaway.2  The reality was a group of academics and scholars setting up an intelligence group to operate as codebreakers.2  The mansion and its many outbuildings had a staff of about 150 people with various new sections moving into buildings as the operations increased.3  These huts were known only by their numbers to ensure the operations going on within were kept secret.3

The big breakthrough in breaking the German Enigma Code was on 23 January 1940 occurred when three mathematicians, John Jeffreys, Peter Twinn, and Alan Turing, discovered the German Army administrative key.3  They then cracked the German Air Force key and later followed with other German, Italian, and Japanese codes.3  The work these men and women did led to the end of World War Two and undoubtedly saved the lives of many people.


Our Visit to Bletchley Park 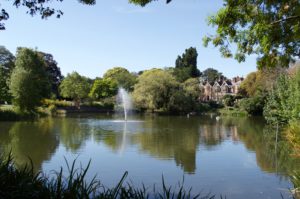 I must admit I had some reservations about whether my daughter or I would enjoy the visit to Bletchley Park.  Living in a modern world we obviously use computers and other technology but the ins and outs of it really don’t interest us.  I was pleasantly surprised by how much both of us enjoyed the day.  We arrived on a beautiful day (just check out the sky on the Mansion picture above) and were greeted with beautifully appointed grounds apparently fairly much untouched since the codebreakers days.  There was a beautiful cafe to eat in, as well as a small playground for the children.  There was also a large chessboard where my children enjoyed playing a quick game of chess.

The lake you can see in this photo was apparently well used for recreation and a welcome relief from being in the huts all day.  When you walk through the various huts they are set up as they were during the war – windows covered so no light could get out, but also so light could get in. They were quite dingy with the electric lighting of the era. 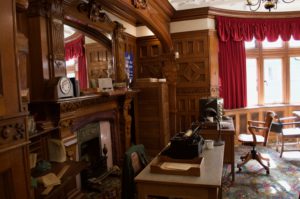 Office in the Bletchley Park Mansion

As I am known to do, I did take plenty of time to admire the Mansion interior.  The building was beautiful with much attention to detail in the woodwork.  The Mansion was built in 1883 by Sir Herbert Leon, the previous home had been demolished in 1793, on land that is mentioned in 1086 in the Doomsday Book.4  Leon and his family lived in the home until it became the home of the codebreakers.4  Following the war the property had various uses including a teachers college.4  However, in the 1990’s the property was at risk of development so the local council stepped in and declared it a conservation site.4  This lead to the Bletchley Park Trust being created and the site opening as a museum in 1993.4  I am so grateful that this occurred as you can see the place much like it has existed for many, many years. 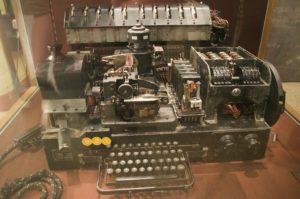 There is so much to see, many different buildings to visit that all played their part in solving the codes to end the war.  This piece of equipment in the photo was just one of the thousands of objects on display throughout the location.  My daughter was the photographer and I cannot recall what this machine was.  I do recall going into one room where they had the machinery operating as it would have during the day.  It took up an entire room, probably the size of a large garage, with a concrete floor, with large machines that were clunking and banging.  They then had interactive displays where you could hear people talking about their roll and see their images appear. It was hot, noisy work.


One thing I haven’t done since visiting Bletchley Park is rewatch The Imitation Game so I’m off to see if I can find it on Netflix!

Had you been to Bletchley Park?   What did you think of it?  Tell me in the comments below.

All images used in this article are in the author’s personal collection taken by her family.