This post contains affiliate links. I may earn money from advertisments, at no cost to you. The opinions expressed in this article are based on my personal experience and research. They do not necessarily reflect the opinions of the companies mentioned or advertised.
21
May

Maryborough – A Day of Exploring

On Saturday afternoon following on from attending the House Histories seminar I had to drive to Maryborough for my son to attend a training day on Sunday.  To say I had a big weekend and was exhausted by the time we got home on Sunday evening would be an understatement.  However, it was an awesome weekend of learning and exploring.

Maryborough is situation approximately 255km north of Brisbane in the Fraser Coast Region of Queensland.  I took the opportunity whilst my son trained to explore the historic area of the town. 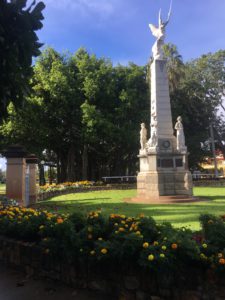 I started at Queens Park that pays homage to the people from the region who served in the wars – Boar through to Vietnam.  The weather was a bit patchy and went from beautiful blue skies to a downpour in a matter of minutes.  I walked around the park checking for trains each time I walked over the train tracks that run through the park.  I admired the large trees that have been growing for many, many years.  I then walked along the river reading the history plaques that discussed the military and wharf history of the region.

I walked from the park up past old buildings of the town including the Court House, Customs House, the Maryborough District Family History Society building, and the Post Office – constructed in 1866 and is Queensland’s oldest surviving one. 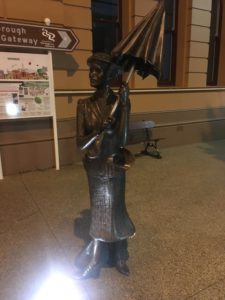 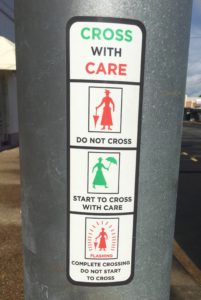 I also discovered that in the Mary Poppins region of the town the traffic lights are Mary Poppins instead of the tradition walk and don’t walk men.   I also found Mr Banks but cannot recall which corner he was on.  The Mary Poppins Festival is held each year in the June/July school holidays. 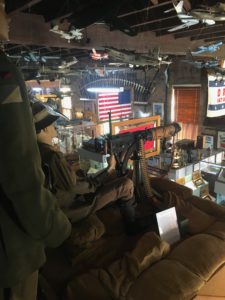 View from second level overlooking first level of the museum

However, by far the most memorable part of the day was the Maryborough Military and Colonial Museum. It is touted by the proud volunteers as being the best Military Museum in Australia outside of the Australian War Memorial in Canberra.  It is certainly the best one I have ever been to.  It is set over three levels in a building that originally was a whiskey and wine factory.  No matter what I say about this museum will understate this amazing collection.  I took an hour and a half to walk around, however, I believe to read absolutely every document and display thoroughly you would need days to fully take it in.

The museum has many displays of medals and original documents of military personnel from WWI, WWII, Vietnam to name a few.  The collection also boasts the full medals of Major General John Cantwell, Commandant of the 2010-2011 Australian Forces in Afghanistan, and author of “Exit Wounds”.  There is also a full display on Timothy Britten CV who after many years of military service joined the Western Australian Police Force.  He received the Cross of Valour for his heroic actions in rescuing people from the Sari Nightclub Bombing in 2002.   If you are driving up the Bruce Highway at any point in your travels and come to Maryborough, definitely stop off to visit this amazing place.


Sometimes the best finds are in the most unassuming places.

Have you been to Maryborough?  Have you done a walk around a historic town and found a treasure?  Tell me in the comments below.


Images – all images in this article taken by the author.