This post contains affiliate links. I may earn money from advertisments, at no cost to you. The opinions expressed in this article are based on my personal experience and research. They do not necessarily reflect the opinions of the companies mentioned or advertised.
13
April

I think it is wonderful that Week 14 of the 52 Ancestors in 52 Weeks Challenge is The Maiden Aunt.  So often these women get forgotten in history as they have no ancestors to research them.  It is lovely to ensure the memory of these women lives on.  The maiden aunt I have chosen to write about today is my great-great-aunt Margaret.

Matheson Family – Auntie Mags is back row, second from the righta

Margaret Emily Matheson – Auntie Mags – was born in West MacQuarie, New South Wales on 18 June 1883.1,2,3  She was the fourth of ten children born to Edith Ford and Robert Matheson.  The family moved to Perth, Western Australia sometime between the youngest child, Gladys’ birth in 1894 and the 1910 electoral roll which shows Auntie Mags living with her parents Robert and Edith.4   The family was living in McMillan Street, Victoria Park and Auntie Mags was working as a teacher.5

In 1916 the family was living at “Taranaki” at 7 Cavendish Street, Victoria Park and Auntie Mags was working as a teacher.5  In 1918, Auntie Mags youngest brother, Robert Hilton Matheson was Killed in Action.6  Following his death the family moved to the house next door and their street was renamed, they called their new home at 9 Duncan Street, Victoria Park – “Hiltona” in his memory.6  Auntie Mags remained living at this home with her parents in both the 1925 and 1931 Electoral Rolls and was still a teacher.7,8

On the 20th February 1945, Auntie Mags home in Victoria Park was robbed.

The home of Margaret Emily Matheson of Duncan Street, Victoria Park, was broken into between 7.30pm and 11pm on Tuesday.  A radio set valued at £11 was stolen.  Entrance was gained by the removal of a wire screen over the kitchen window.9 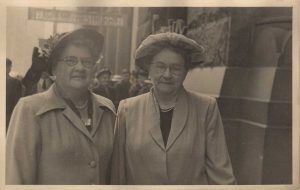 Auntie Mags continued to have a good relationship with her siblings into her old age.  This picture is of her with my great-grandmother, Gladys.

My mum remembers living with Auntie Mags for quite a while as a child in the family home in Duncan Street when they had nowhere else to live.  Mum says she remembers going through the back fence to the church manse behind the house to play with their little girl.  Sadly this home that had been in the family since WWI is now gone and a shopping centre is in its place.

Mum recalls a story about Auntie Mags teaching – one day an aboriginal man came into her classroom, sat down and refused to leave because he wanted to go to school.  She gave him a pen and paper so he could learn.

As each of her great-nieces and great-nephews had a child, Auntie Mags would make them a layette for the new baby.  It was no mean feat given she had at least 20 nieces and nephews, many of whom went on to have their own children!  I never received one because Mum says as the family thought she would never marry Auntie Mags made her something else before she went nursing overseas. 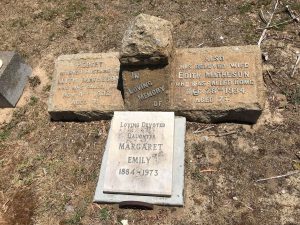 I never got to meet Auntie Mags but heard stories about her as I grew up.  Unfortunately, I never wrote them down.  Writing this article has made me realise how little I know about her.  Quite often these women get forgotten in the family tree as they don’t have their own descendants.  I am making a note to spend some time research her teaching career and see if I can find some more out about her.

Do you have a maiden aunt in your tree?  Find out more about her by clicking the image to look at the records on Ancestry.