This post contains affiliate links. I may earn money from advertisments, at no cost to you. The opinions expressed in this article are based on my personal experience and research. They do not necessarily reflect the opinions of the companies mentioned or advertised.
16
May

I don’t know about you but I really enjoy walking around historical cemeteries.  I would think many genealogists do.  I am fortunate that my daughter loves to do this as well but hers more for the creepy aspect of it and the intricacies of the designs on some of the headstones.  My son is not so keen on this pastime but we feel that 2 out of 3 will always win the argument.  One of our favourite cemeteries to visit is Toowong Cemetery in Brisbane, Queensland.

In the early days of Brisbane, burials of soldiers and convicts occurred near the William Jolly Bridge, and as this was deemed unsuitable for child burials, children were buried in a brick crypt at North Quay.1  It became clear that a more suitable location was required so the Government established the North Brisbane Burial Grounds at Milton in 1842.1,2  The cemetery was located where Suncorp Stadium now stands.3

In 1851 the public demanded the Government find a more suitable location for a cemetery as residents feared for their health as the rapidly expanding population encroached on the cemetery.1  In 1861, to appease the public, 200 acres was allocated to establish the Brisbane General Cemetery at Toowong (Toowong Cemetery), approximately 2 miles from Milton.1,2,3    In 1911 the Government turned the overgrown old cemetery into recreation grounds after allowing relatives to move internments to other cemeteries.1,3  In total, 139 remains and 105 memorials were moved to Toowong from the Milton site.1 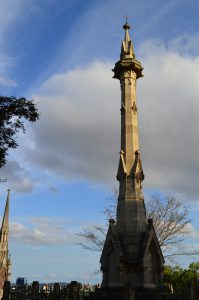 However, it would be many years before the cemetery was utilised in its intended form as locals continued to use Milton Cemetery, deeming Toowong too far to travel to due to a lack of public transport to the cemetery.1,2  In 1868 the Cemetery Act passed and trustees were appointed, who required the cemetery to be surrounded by public roads.1  To meet this request the Crown allocated a further 53 acres.1   The first burial occurred on 3 January 1871, when Governor Samuel Wensley Blackall, a strong supporter of the Toowong site, was buried at the highest point with sweeping views of the city.1,2

Another six burials occurred prior to its official opening on 5 July 1875 when the extension of the rail line to Toowong and a bus service to the cemetery became incentive to finally open it.1,2,4  In 1901 the tramway was extended to the cemetery to further appease the populations requirement for public transport to the cemetery.1  Much criticism was to follow the opening with a parliamentary inquiry in 1877 discussing the distance people were required to travel and the steep, rocky land that the cemetery was situated on.1

In keeping with the social class structure of the day, the demarcation of the classes was requested by churches and like-minded people, to ensure segregation remained in perpetuity.1  The boundaries were clearly demarcated by the formation of the windy roads that still exist today.1   The Defence Force leased the unused portion of the cemetery, where Anzac Park now sits, for a rifle range.1   In 1915, 135 acres was dedicated for parks and recreation where the Old Rifle Range stood, with the proceeds of this sale going to the Toowong Town Council.1  This enabled the cemetery trustees to build gates and fencing around the cemetery.1

Toowong Cemetery is a heritage-listed cemetery at the base of Mt Coot-tha and just off the Western Freeway in suburban Toowong.2  It is the largest cemetery in Queensland with over 119,000 people interred there.2  It stands on forty-four hectares, just under five kilometres west of the Brisbane CBD, at the base of Mt Coot-ha, surround by the botanic gardens, and Brisbane Forest Park.2,4,5  Toowong Cemetery is popular with locals as a recreation reserve for jogging and walking.2  It is a beautiful with rolling hills, large trees, windy paths, with some amazing views over the city.2.  The Cemetery today has many well-established trees, many of which were contributed in the early days, by The Botanical Gardens and Acclimatisation Society, to create the beautiful setting it is today.1 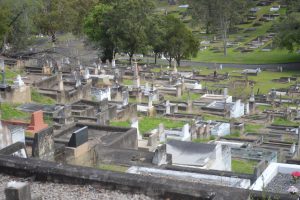 The management of all Brisbane cemeteries, including Toowong Cemetery, was transferred to the Brisbane City Council on 1 August 1930.1  The area of the cemetery between Mt Coot-tha Road, Miskin Street, and Dead Street was utilised by the Australian Military for training purposes and later transferred to the Brisbane City Council who built a bus depot there.1

In 1975 the cemetery was closed to burials but in 1998 reopened with 450 plots for sale.1  From April 1975 the council set about removing old, worn headstones in the Toowong, Lutwyche, and South Brisbane cemeteries planting trees and shrubbery in their place.1  It is believed that 1,000 were removed at Toowong.1  The old Sexton’s Office was renovated and converted to a museum by the Brisbane City Council Heritage Unit who encouraged public awareness of the heritage of the cemetery.1  Boom gates were erected in 1992 to deter hoons and vandals.1

Burials can still be conducted at Toowong with limited new sites available.4 Family graves can be used by direct descendants if there is space or if the last burial was over 30 years ago.4  The cemetery is cared for by Brisbane City Council in conjunction with the Friends of Toowong Cemetery group.2

You can view a map of the Toowong Cemetery on the Brisbane City Council website.

The Friends of Toowong Cemetery 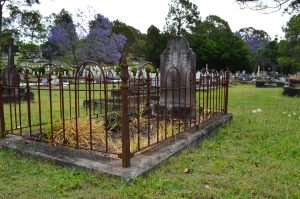 The Friends of Toowong Cemetery is a volunteer group, established in 1975, that works in conjunction with the Brisbane City Council to care for the cemetery.1,5  They have created a number of heritage walks such as The Thin Blue Line, Suffer the the children to come unto me, and Notable Women to name a few, that can be downloaded from their website – Guided Heritage Walks.5  The Friends of Toowong Cemetery have created self-guided walks through the cemetery as well as conducting monthly tours for the general public to learn more about the cemetery.2,5  Ghost tours are frequently conducted on weekend evenings.2

Do you enjoy visiting cemeteries?  Do you have some stories about the treasures you have found there?  Please comment below and tell me your great cemetery stories.

All images contained in this article were taken by the author’s daughter, are used with permission, and are in author’s possession.