This post contains affiliate links. I may earn money from advertisments, at no cost to you. The opinions expressed in this article are based on my personal experience and research. They do not necessarily reflect the opinions of the companies mentioned or advertised.
8
May

The week 19 challenge in 52 Ancestors in 52 Weeks is Mothers’ Day to fit in with this wonderful day where we celebrate our mothers.  My story today is a bittersweet Mothers’ Day story. 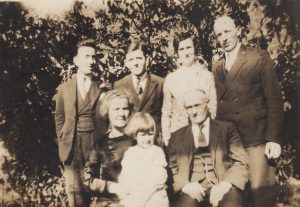 Dorcas Stokes was born on 19 November 1898 in New Invention, Staffordshire, England to Samuel Ernest Stokes and Fanny Richardson.1  She was baptised in Holy Trinity Church, Short Heath on 25 December 1898.2  In 1901 the growing family was living at 50 Essington Street, Essington, with Oliver having been born in 1900.3  Hector completed their family when he was born in 1905.4  Samuel was a cycle engineer when Dorcas was born, however, by 1901 he was a coal miner.1,3  The family continued to live in the Short Heath area throughout her childhood.3,5

Dorcas married Howard Walker on 26 October 1925 in Short Heath.6  They had two children, Eileen and my dad.  At the time of the 1939 Register the family was living at 62 Rowley Grove, Stafford.7  Dorcas, as was fitting with the era, was a stay-at-home mother performing unpaid domestic duties.7

Dorcas as remembered by her son – In his own words

Dorcas was known by the family as Dolly.  Because war was looming my father and our next door neighbours built a big underground air raid shelter at the bottom of fairly long gardens, between our small orchard and a farm field on the other side of the fence.  My mother had survived the Great Depression and she and the lady next door started getting food stocks prepared.  Vegetables and fruits and eggs in water glass were carefully stashed in the shelter.  All these items were home grown.

We were fortunate that there were load of fighter air fields set up to protect the industrial midlands and particularly important firms such as Rolls Royce in Derby.  One visual memory I do have was my mother carrying me from the house with me looking up at the dark sky.  When I was a little older I told my mother that I had seen big birds in the sky making funny sounds and she had stood on the shelter.  Looking south along the field i could see a bright red, white, and yellow glow in the sky with white beams of light moving backwards and forwards.  My mother later told me about Coventry. 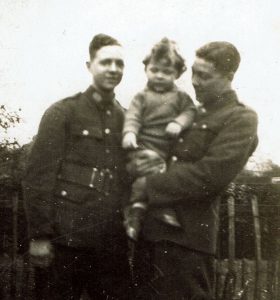 During World War II we had refugees for southern England staying with us for a while until they were replaced by service personnel.  My sister carried on a friendship with a girl from Margate who, after the war invited us to stay with her family as a ‘thank you’.  My mother, a qualified teacher, arranged for us to stay in London, when we were going home, and took us round the Science and Natural History Museums.  For years afterwards I visited these institutes and became fascinated by the crystal exhibitions.  My mother bought me a chemistry set for Christmas in 1948.  She taught me to read music and encouraged me to sing in our church choir.  This was the last Christmas together as she died in 1949 just before I took a scholarship exam to go to a local boys Grammar School, which she did not see. 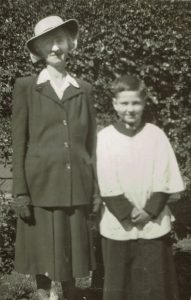 As a child I never understood my dads hesitance to celebrate Mothers’ Day with anything other than a card and present.  I was to learn that his mother had died on Mothers’ Day, 8 May 1949 in the Stafford General Infirmary of cancer.8  Dad was just 11 years old when she died and he told me that he found out in the school playground when friends asked him why he was at school when his mother had died. Dad said no she is in hospital. She had died the day previous and his father had not told him.  Dad was not allowed to attend the funeral.  I have been unable to find out where Dorcas was buried and one of my tasks when I visit the UK later this year will be to ask the older relatives if they recall where she was laid to rest.

Today I remember my Grandma on the 69th anniversary of her death – Happy Mothers’ Day to my grandma, Dorcas and to all the Mothers’ around the world.

Do you know where your English ancestors were living at the outbreak of World War II?  Click the image to search the Findmypast 1939 Register to find them.