Every family has someone in who is bait different, quirky or just plain lager than life.  The Week 30 52 Ancestors in 52 Weeks Challenge is Colourful.  Today I am writing about my maternal grandfather, Byro Jim. 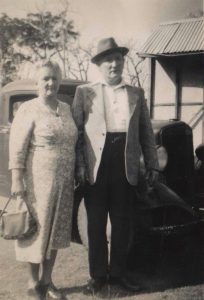 Ruth and Fred – Albert Newman’s parents in approximately 1950a

Albert James Newman was born on 18 March 1920 at 889 Hamilton Street, Boulder Western Australia to Frederick Charles Newman and Ruth Bridges.1  He was the second eldest of four children – Beatrice, Ruth, and Frederick.  I do not know a lot about Byro Jim, as he came to be known, due to a family estrangement.  I apparently met him once when I was about 4 years old but have no recollection of this.  I did not know of his existence until I was a teenager as I had always known my grandma’s second husband as my grandfather.

I know nothing about his childhood, as even though I have been in contact in recent years with his niece, the daughter of his youngest brother Fred, he does not know a lot about him as there was a large age gap between them.  At some stage between his birth in 1920 and Ruth’s birth in 1922 they moved to Perth as she was born there.2  I was told by Fred’s daughter that at 16 years of age Byro Jim commenced working as an apprentice saddle maker – a skill he was apparently quite talented at.  There are apparently a few samples of his work still in existence but I am yet to see these.

On 16 July 1941 he enlisted with the Army at Tuarts Hill but by 20 August 1941 he had been discharged.3  I am unsure as to why as the records are not available to the public.3  My cousin told me he took off up north to avoid the Army – time will tell.3

He married Marjorey June Brand on 5 June 1943 in Mt Helena Methodist Church.4  At this time he was working as a farmer in Rosa Brook, Margaret River, on his parents farm.4  They had two children – my mother and her younger brother. 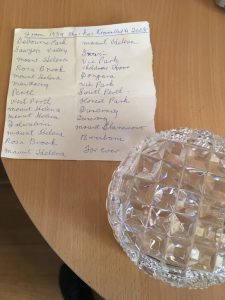 Crystal bowl with locations it travelledb

In 1949, the family was living in Deal Street, Mt Helena, the farm of my grandma’s parents, and Byro Jim was working as a labourer.5 At some point they were living in Dalwallinu, Western Australia, which is about 232km north of Mt Helena, and Byro Jim was working as a farm labourer.6 I am unable to ascertain whether they moved north or south in 1949 as the family moved quite often. I came across a crystal bowl in my grandmother’s estate that had a piece of paper in it that showed where this piece of crystal had moved over the years (see Image b).

He was the family secret and most of the grandchildren were teenagers before we knew of his existence.  What I have gleaned over the years was he was a saddle maker and owned his own shop for a time, however, by 1949 was working on farms but he did not want to be a farmer and at some point he started drinking.  He was off the radar for many years after he separated from Marjorey but got his nickname Byro Jim when he was working on Byro Station in Murchison.  He was living in Yalgoo in his later years.

I was fortunate a few years ago to be sent a couple of articles that had been written about him.  “Byro Jim’s Lucky Break” by Colin Kerr apparently appeared in the Australia Post Magazine in 1994. “Biro Jim gets a lucky break” by Frazer Guild was written around the same time as the stories are very similar. 7,8  I have not been able to source an original copy of the magazine or newspaper but hope one day to find it on Trove! 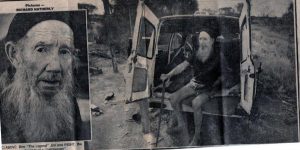 The articles say that he was living as a hermit about 20km outside of Yalgoo when he had an accident at 85 years of age that saw him break his hip and left leg 7,8  Byro had not been around other people for nearly a year and the chances of discovery were going to be remote.7,8 His mate Shorty had a feeling something was not right and drove out to the campsite and put Bryo in his ute to a waiting ambulance which then took him the 120km to Mullewa Hospital. 7,8  He was then flown to Sir Charles Gardiner Hospital in Perth for treatment for five months. 7,8  Upon his return to Yalgoo a house in town was found for him to live in and locals would often see him walking around with his walking stick ready for a yarn about the old days of Yalgoo. 7,8

Both these articles raise more questions as they appear to have a number of anomalies if they were written in 1994 as I was told.  They state that he was 85 years, however in 1994 he would have only been 74 years.  They say that he was born in Esperance but his birth certificate clearly states Boulder.  They say that at 16 he drove a camel wagon to Murchison and that his wagon is a feature at the Yalgoo museum.  All the family stories state that he worked as a saddle maker at this age, although, they the articles do mention he was a saddler.  Whatever the story, Byro Jim indeed appears to have lived a colourful life.  I really would love to source the original articles just to confirm the publication dates. I have checked on Trove. I have tried to find the journalists who wrote them. Alas, I have been unsuccessful at this time.

He died on 6 June 2004 in Mullewa and is buried in Mullewa Cemetery.9 The inscription on his headstone reads “17 Mar 1920 – 6 Jun 2004. Father of Jim, father in law of Helen, grandfather of Michelle, Mark, Arron (dec), and Jason, g-grandfather of Alexandra, Jackson and Nicholas”, however you would note that his birth date is incorrect on this.9

Do you have an ancestor with a colourful past?  Tell me about them below in the comments.