The 52 Ancestors in 52 Weeks Challenge for Week 37 is Closest to Your Birthday.  I trawled through my ancestors to find someone who may share a birthday with me, but alas, was unable to.  The closest date I could find was the death of my great-grandfather.


Week 37 – Closest to Your Birthday

My maternal great-grandfather, Frederick Charles Newman, was born on 11 September 1897 in Perth, Western Australia to Charles Newman and Minnie Elizabeth Stockwell.1 He was the youngest of five children – James, Henry, George, and Ruth – and at some point after his birth the family moved to Kalgoorlie as his parents are listed on the 1903 Electoral Roll at 1511 Oberthur Street.2 I know nothing of his early life as I do not recall ever meeting him as we were not in contact with the Newman side of the family. 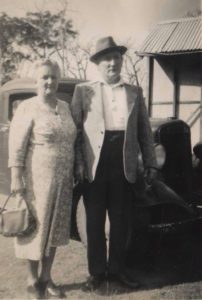 Fred, a bachelor, married Ruth Bridges, a spinster, on 14 January 1918 in the Kalgoorlie Congregational Church.3 His occupation at this time was listed as a motor mechanic and they both lived in Kalgoorlie.3 They had Beatrice who was born in 1918, Albert (my grandfather) born in 1920, Ruth who was born in 1922, and Frederick in 1928.4,5  At the time of my grandfather’s birth, Fred was working as a miner and the family lived at 889 Hamilton Road, Boulder.5  Ruth and Frederick (junior) were both born in Perth so the family had moved sometime between 1920 and 1922 to Perth.


In 1925 the family was living in Bridgetown and Fred was working as a labourer, however, in 1931 they were again in Kalgoorlie and he was working as a miner.6,7 By 1936 they were back living in Perth and he was again a labourer.8 In 1943 the family was in Rosa Brook in the Margaret River district where he was a dairy farmer.9 By 1954 Fred was a timber worker in the Margaret River district.10 My mum told me that the received the Rosa Brook land in the Soldier Resettlement Scheme, however, to date I have been unable to find evidence of this or of Fred ever serving in the military.

a. Ruth and Frederick Newman, Circa 1950, Original in author’s possession.