This weeks challenge in 52 Ancestors in 52 Weeks is Unusual Source.  There are so many resources out there for genealogists to explore.  The usual birth, death, marriage, census, immigration, and military records but there is so much left to find.

For a long time I have wanted to know more about my children’s paternal great-grandmother’s home “Rockmount” in Annerley, Queensland.  I have written about it in Week 18 – Close Up.  I have googled, checked out library and archive websites but have been unable to find a history of this house.  On the weekend I attended a seminar, which I wrote about here, and one of the people to talk was an archivist with Brisbane City Council and she renewed my interest in doing this.

So today I bit the bullet and called the Queensland Titles Office and within a couple of hours I had the Certificate of Title.  It confirmed that the house had been owned by their great-grandparents Hugh and Amelia Elizabeth McNeilly.  They purchased the home on 19 March 1913 from Shepherd Smith who had attained the property by Deed of Grant on 7 August 1862.   On 8 March 1922 a new title was issued when the government changed the system. 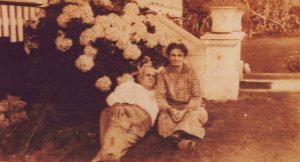 Amelia’s death on 12 January 1938 is recorded on 3 November 1938 with the property transferring to Hugh.  On 23 November 1949, the Public Curator produced the death certificate dated 29 June 1948 for Hugh.  It was not until 8 February 1950 that this was entered in the system and on 8 May 1953 it appears to have been sold to another couple.  I have no idea if the family lived it in from his death until it was sold.

Whilst a Certificate of Title is a common enough item – our name goes on one whenever we sell or buy a property – it is often overlooked as a source of information for genealogists.  This document showed me that the family did indeed own the property and didn’t just rent it.


Do you have an interesting home in your family history?  Have you researched it in the past?  Tell me in the comments below.

1. Titles Registry Office, Queensland. Certificate of Title, County of Stanley, Parish of Yeerongpilly, being subdivision 9 of portion 157A.

a. ‘Rockmount’, Image Courtesy of realestate.com, Accessed 28 May 2007.
b.C.1920’s Hugh and Amelia McNeilly at “Rockmount”, Annerley, Original in author’s possession.